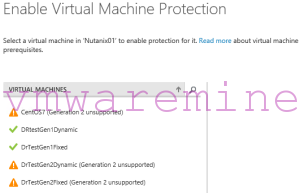 I’ve seen some information about Hyper-V Generation 2 virtual machines are now supported on Azure. Asking around and looking at MSFT official documentation or several blog posts I got confused. Some sources says it is supported some sources says – not supported. I decided to test it. I’ve created several VMs on my Nutanix test lab and included them into Private cloud on SCVMM. Workloads in my SCVMM private cloud are in protected by Azure Site Recovery to Azure. Location of my Protect vault and storage account is Western Europe. As you can see Generation 2 VMs are not supported by ASR to Azure – at least in my  GEO region.

Since some time Microsoft Azure team introduce support for Generation 2 virtual machine support on Azure by Azure Site Recovery Manager. After deep look, turns out it is not Generation 2 support but conversion on “the fly” to Generation 1 virtual machine, when failover to Azure. And conversion back to VM Generation 2 VM while fail back from Azure to on-prem Hyper-V. In addition, there are some limitations:

Artur is Consulting Architect at Nutanix. He has been using, designing and deploying VMware based solutions since 2005 and Microsoft since 2012. He specialize in designing and implementing private and hybrid cloud solution based on VMware and Microsoft software stacks, datacenter migrations and transformation, disaster avoidance. Artur holds VMware Certified Design Expert certification (VCDX #077).